An appeal against the demotion of Gordon Elliott’s Pied Piper in the Grade One Jewson Anniversary 4-y-o Juvenile Hurdle at Aintree has been dismissed by an independent panel.

The horse and Milton Harris' Knight Salute were initially regarded to have dead-heated in the two-mile-one-furlong affair, but a stewards' inquiry was then called into interference suffered by Knight Salute over the final flight.

Pied Piper, trained by Gordon Elliott and ridden by Davy Russell, drifted towards the left on the approach to the last hurdle, straying into the path of Paddy Brennan and Knight Salute and forcing them off their line.

Brennan was pushed left for three strides before pulling his whip through into his left hand and straightening his mount, who then rallied to the line and passed the post exactly level with Pied Piper.

The stewards later chose to demote Pied Piper as a result of the interference, making Knight Salute the outright winner of the race despite Brennan stating explicitly that his chances had not been hampered.

Andrew and Gemma Brown, owners of Pied Piper under the Caldwell Construction banner, opted to appeal the demotion and were represented by Rory Mac Neice as the British Horseracing Authority case was put forward by Louis Weston.

A three-person panel comprising of HH Philip Curl, Ian Stark OBE and Steve Winfield heard evidence and submissions from both parties, with Russell appearing virtually from Nashville ahead of his ride aboard Nicky Henderson's Pistol Whipped at Percy Warner Park on Saturday.

After a brief deliberation the panel chose to dismiss the appeal and adhere to the initial findings of the stewards' inquiry, leaving Knight Salute the winner of the race and Pied Piper the runner-up.

Weston argued that as the two horses were inseparable at the finish, any interference at all must be considered to have had an impact on the final result.

He said: "This was a dead heat, all you need to find is that he's (Knight Salute) gone one blade of grass further, that he's been checked for a millisecond and he's been unable to take the momentum forward that he wanted.

"That's what the stewards said and they were right."

Brennan maintained the same stance that he took in the immediate stewards' inquiry, stressing that he had been intending to mount a late challenge and head for the rail and that therefore an incident that halted his momentum some way from the line and pushed him towards the rail was not a hinderance.

"What I said on the day is exactly how I feel today, nothing's changed, I felt I had a fair crack at it and that's the way it was," he told the panel.

"I wanted to play my cards as late as possible because I didn't want to help Davy Russell, getting upsides him before the last wouldn't be a help for me.

"I was always going to have to switch, either to the left or to the right, obviously I wanted the rail so Davy's horse having a look at the last forced me to go there and I was happy to have the rail."

Mac Neice's submission revolved around the suggestion that Pied Piper was prone to idling when alone in front and only began to race in earnest when joined in the final strides by Knight Salute.

It was this locking of horns, Mac Neice put forward, that benefited Pied Piper and ultimately won him the race, not the inconvenience Brennan suffered at the last.

"Far from being hindered, Mr Brennan said what happened at the last made absolutely no difference to him, he was waiting until after the last anyway.

"Cat and mouse was how he put it, he was content to gain the advantage of the rail, which requires him to go to the left."

Russell lamented his ride on Pied Piper, telling the panel he had hit the front far too early and that what won him the race was not Knight Salute's impediment but his eventual ability to rally on the line.

"I want someone to come and join me because I know he's going to idle, I'm getting no response from my horse and he's not giving me everything he's got.

"The stick is not making any difference to him. I thought I was going to get beaten and passed but when Mr Brennan's horse came into my horse's eye line, he saw and responded and then battled back to the line." 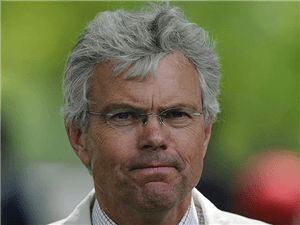